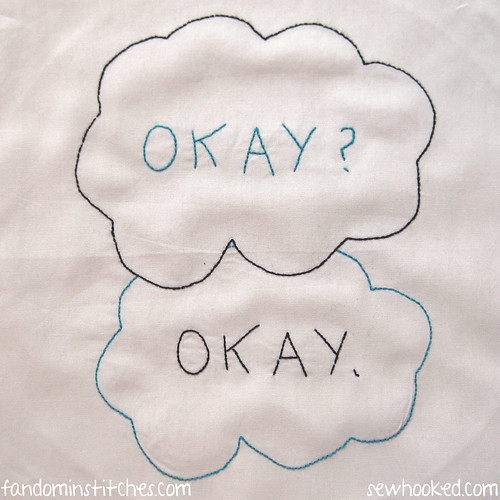 Also on the Fiction & Literature page on Fandom In Stitches

I get a lot of emails from readers of both Sewhooked & Fandom in Stitches and one of the comments I receive more than any other is “why aren’t your fandom patterns on Sewhooked?”

Well, isn’t that a good question?

Back in 2012, I split Sewhooked in two when I established Fandom in Stitches. My collection of fandom patterns designed by myself and my friends had grown so huge that it was actually crashing my website. After a lot of rearranging, I eventually decided that those fandom patterns needed a home of their own.

Everything that was Harry Potter Paper Piecing, the Twilight Block of the Month (designed by Cat Magraith), and a slew of other fandom-themed patterns by both myself and my designer friends were the beginning of Fandom in Stitches.

When I split Sewhooked, I moved all those fandom patterns to make Sewhooked friendlier and easier to navigate. The unanticipated side effect is that you, my beloved and loyal readers, often don’t realize that I design for more than one website, so when I share a pattern like The Fault In Our Stars: Okay? Okay. (above), you may never see it. 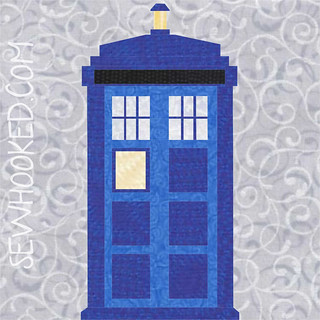 also on the Doctor Who page on Fandom In Stitches

So, by popular request, I have compiled my collection of fandom-themed patterns designed by me and put them together on their own page here on Sewhooked!

Each and every one is absolutely free for your personal & non-profit use.

Find my free fandom patterns and many more by other excellent designers on fandominstitches.com. All patterns are absolutely free. All we ask in return is that you use them for personal & non-profit use only. We wouldn’t say no to sharing your photos either!

I love to share free patterns and continue to do so by your generous support of my Craftsy shop. Thank you so much for shopping Sewhooked and supporting Indie Designers. 😀

Share your Paper Piecing Vintage photos with the Sewhooked flickr group for a chance to win fun prizes all year long.  The May prize includes the bundle of fabric and two Sewhooked-themed pin back buttons above! Winner to be chosen Monday, June 2, 2014.

Need some help with paper piecing? Check out my FREE full-length workshop.

…and a little bit of rambling!

I’ve been walking down memory lane and plundering my old forum posts. I don’t post much to crafty forums anymore, mostly because I like the “not having rules” part that comes with posting to my own blog. 😉

This Way Back Craft has had some of the greatest comments of both love and hate, including the dubious honor of having once been featured on Craftastrophe.  Poor Edward was referred to there as a toilet paper cover. Fortunately for me, I have pretty thick skin and a sense of humor, so I took it with a grain of salt, which is exactly the vein in which Edward Puppet Pal was made.

What I didn’t say in the following forum post is that I also included a list of Edward’s catch phrases, so he would always have the right thing to say at just the right time! See, sense of humor. 😉

You can see my original crafter post here. Edward Puppet Pal was part of the same swap as the Team Edward t-shirt that was immortalized in my first freezer paper stenciling video. You don’t know comments until you post a video on YouTube with the word “Twilight” anywhere in the tags, title or description. Viva la haters!

I made this for silverfisch for the Twilight Swap Round 2 (gallery).  It’s Edward Cullen, from Stephenie Meyers’ Twilight, inspired by The Potter Puppet Pals.

He’s made out of felt, with fabric paint details on his face.  I really just eyeballed the whole pattern, figuring it out as I went along.  I hope you like him!

I made the button on my buttonmaker, with a little help from some poly glitter!

The rest of the swap…

The awesome organizers over at help_haiti on Livejournal have found a great way to get fandom (all fandoms!) involved in raising money for charity while getting fun stuff in return.

Crafters, graphic artist, writers and all sorts of other awesome people are donating their time and talents in return for charitable donations.   You can bid in the comments of the item you’re interested in and once the auction is closed on noon (EST) January 20, 2010, the items will be paid for by donating to charity!  Share your receipt and get awesome goodness in return.  The charities win and you win, too!

I’m offering up one Custom Designed 5″ Paper Pieced Quilt Pattern. You can read the full details here.  Be sure to bid in the comments at this link.  I cannot accept bids here.

Also check out these awesome auctions by two of my crafty friends:

Amber (hp5freak) is auctioning off a 3’x3′ custom crochet blanket. She makes gorgeous and unique HP-themed blankets. You can see those here.

Mary (dragonsinger954) is the maker of many a fine Molly Weasley sweater.  She’s offering a custom-made one up right here. You can see examples of her many lovely Molly sweaters here.

Also, the Queen of The Leaky Cauldron herself is auctioning off one autographed copy of Harry, A History.  It’s a good thing, too, because you can’t have mine!

Happy bidding and thanks for supporting this wonderful cause!

In which I talk about swaps, gum, paper piecing classes, Batiks on Black and crocheting for The Linus Connection!

Lots of updates on completed swaps as well a Super Secret Guest and some Halloween photos!

Promote Your Page Too

add to your Ravelry queue:

This is another pattern for the Twilight Crafts Black & Red Swap.  While the pattern itself is very easy, working on it is a bit tedious.  It’s well worth the patience to get the awesome pattern that works up as you go.

Throughout the pattern, you will be working across the strand of yarn that you are not using.  This means you’ll only have ends to weave in at the beginning and end.    See the illustrations in BD Chessboard for examples on how to do this.

Because of the way this pattern is worked, you’ll want to pay special attention to your two strand of yarn so they don’t get too twisted.

Repeat pattern for Rows  3-12, always working across the color not on the hook, finish off.

Once upon a time, I made myself a Cullen Crest stenciled tee.  I posted it here and started getting requests to share the stencil.

So I did, and then in November of last year, I posted about it here on the sewhooked blog.   I pulled the stencil together for myself before there was anything commercially available with the crest on it, back when all fans had was a tiny glimpse from an MTV teaser.

Fast forward to today and The Cullen Crest Stenciled Tee is one of my most visited posts, with a downright ridiculous number of visits each month.    The Cullen Crest in general is huge in handmade. If you don’t believe me, search it on etsy or on flickr.  Woah.

I have see my version of the Cullen Crest everywhere since I first posted it and I thought it’d be fun to show a few of the ways it’s turned up. If you look closely, you can certainly tell the difference from the official crest (shown below) and the image that I created (shown above), so you’ll always know which images, no matter how they are presented, came from the stencil that I designed.

I took a lot of liberties with the official image to make it into a stencil from the tiny image shown above.   Those changes included greatly simplifying the image and adding the “Cullen” text to the top.

The Cullen Crest goes viral…
My stencil makes it around the world and onto everything you can possibly imagine!

images from a variety of sources

Some of the things I’ve seen the stencil on were for sale, and while I don’t condone the taking another crafter’s stencil, pattern or idea that is free for everyone to use and then making something to sell (in case you didn’t know, that’s a crafty taboo!), I don’t deny the ingenuity of the different uses the stencil has been put to.

To everyone that has used it on something for yourself, a friend, a swap, a gift or any other way that was just for fun and not for profit, A HUGE THANK YOU.  That’s why I share my stencils, patterns, crafts and ideas, to spread the crafty love.    Thank you, too, to Summit and whoever the awesome artist was that came up with the original crest!