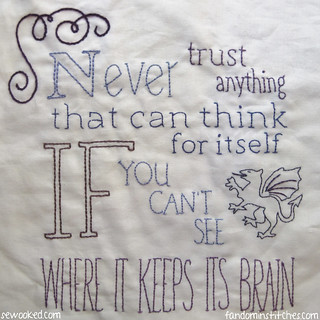 A quote from Harry Potter & the Chamber of Secrets, as spoken by Arthur Weasley

This is it. The design that inspired the entire idea for The Summer of Stitching on FiS! I’ve had this in my mind to do forever, just years, and it’s finally a real thing!

My idea behind this was to do a wizardy version of a embroidered saying that might hang on the wall at The Burrow. I’ve loved this quote since the very first time I read The Chamber of Secrets. How incredulous Mr. Weasley is when he realizes that Ginny has (as he sees it) ignored his good advise!

You’ll find credits for the fonts used (even the griffin is a font!) in the pattern itself.

It’s been a while since I created a new Harry Potter pattern, and I have to say, it was not only fun, but brought back a lot of good memories from when I was designing HP almost every day.

Find more of my fandom patterns right here on Sewhooked!

Be sure to stop by Fandom In Stitches every Wednesday into September for a new theme and a new batch of fun patterns to stitch!

This month, ALL photos of projects made from Sewhooked patterns, including Paper Piecing Vintage, shared with the Sewhooked flickr group will be entered to win a copy of Jack Leaves The Light On!

Dipper reminds us to always check the seat before sitting.
My ironing station got a much needed update! I have an #ikea Bror cart on wheels, which I absolutely love. I originally didn't get the cabinet attachment because I didn't think I needed it. Six months after moving back into my sewing room, the top shelf was a disaster covered in an old blanket to keep my homemade spray starch from getting all over everything. This is MUCH better. Just look at those kitty bins. 😻