A very happy Halloween my friends!

We made it, it’s the final day of 31 Days of Halloween!

Over the last month, we’ve stitched, pieced, cooked and prepared Halloween costumes! We’ve revisited old favorite crafts and discovered new ones. I hope that at least one of my Halloween projects caught your fancy and gave you something fun to work on during the month.

If you’d like to revisit our month of Halloween, simply scroll back through Sewhooked starting with this post or click the banner above for a summary of each day and links to all the Halloween goodness.

Thank you, thank you for sticking with me until the end!

I have one last Halloween-themed craft for you today. It’s  a little something to keep your hands busy while you enjoy watching Halloween movies and hand out candy to trick-or-treaters.

Let’s start with this little clip from one of my all-time Halloween favorites, It’s The Great Pumpkin, Charlie Brown!

I watched this Halloween gem when I was a child and then shared it with my own kids. It’s still a favorite in our house. 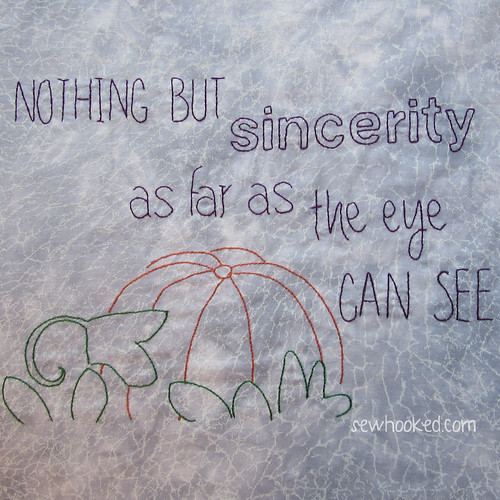 With Linus’ optimism about The Great Pumpkin in mind, I created a little hand embroidery pattern for you that I’m calling Nothing But Sincerity.

My version is entirely backstitched, but feel free to use any stitch you like.

Won’t it make a lovely pillow or addition to a Halloween quilt?

Want to Enlarge or Reduce this pattern? Find out how here!

Need embroidery help? Try the Quilting Help page over on Fandom in Stitches! We have lots of great links to useful tutorials.

The pumpkin was inspired by the scene in the clip above.

for a very special Halloween installment!

Are you making projects from 31 Days of Halloween? Share your photos with my flickr group! There will be a fun surprise next Tuesday for one lucky participant!

The first costume I made myself was one of my Dad’s suits that I reconstructed to look like Madonna in the Who’s That Girl? video.  I was in high school at the time.

Since then, I’ve enjoyed making all kinds of costumes, mostly for my kids.  Halloween is, of course, a darn good reason to costume!

Our family tradition is this:  My kids have until September 30 to choose a costume idea.  Once they’re decided, there is no going back and the planning begins in earnest.  They tend to lean towards character costumes, which are fun to try to duplicate.

This year, my 13 year old daughter wanted to be one of her all-time favorite characters, InuYasha. I created the top half of the costume based on a kimono I made some years ago. There are a number of custom changes to make the top appear the same as InuYasha’s. The pants are adapted from a pj pattern, with a more flared leg and belt.  The wig was purchased, with handcrafted ears added (made from faux fur and felt).  The sword and necklace were purchased online.  The scabbard is a toy sword scabbard that’s been covered in black fabric.   The entire costume is made with quilter’s cotton.

My 10 year old son’s costume this year was Ryoga, from the manga and anime, Ranma 1/2.  The top is a reconstructed sweatshirt with a custom collar and cuffs made from cotton fabric.  The belt is also cotton fabric.  The pants are adapted from a pajama pattern, with loops added to the sides for lacing the legs.  The rucksack is completely custom from canvas.  The red paper umbrella was purchased online and customized with paint and fabric.  The cording is clothesline cord.   His headband is made from a strip of darker yellow fabric with squares stenciled on in black paint.

The two characters are from different manga / anime series, but both are creations of the same author, Rumiko Takahashi. We thought we’d have a little fun with that and took a couple of “what are you doing here!?” poses!

My husband and I like to dress up, too!  This year, my hubby, Eli, was Charlie Brown in a t-shirt I stenciled and black shorts made from a commercial pattern.  I was Slytherin Pansy Parkinson in a hand painted green tie and custom Slytherin buttons…snarky attitude included!

InuYasha and Ryoga are not amused at having a Slytherin at their back!