For the last several years, I’ve started January with a To Do List for projects past that I would like to tackle and (hopefully!) finish for the year.

See my 2014 To Do list, including photos of where each project stood at the beginning of last year. Today’s recap doesn’t include projects started and finished in last year, just UFOs from previous years.

The entire list in one bag,  sorted by project and ready to work on as of January ’14.

January 2014 Status – WIP.  This is the second of two quilts made from Harry Potter quilt block swaps from way back in 2007 or so. Pieced with border. Have batting & backing fabric.  Needs to be quilted and bound. I’m planning on binding in red so the pale blue border has a solid stop.

Current Status – WIP, with progress – This quilt is basted and free motion quilting is in progress, The borders are quilted. Each block still needs quilting and then it needs to be bound and labeled. On hold while I have my sewing machine serviced.

January 2014 Status – UFO. My hubby bought this for me for our anniversary several years ago. In needs to be quilted, possibly by hand. Needs a back & binding. I’m thinking muslin for the back.

Current Status – UFO with progress. I now have a back and batting for this quilt, but it still needs basting and quilting. It hasn’t happened yet because I’m still undecided on how to finish it. Fingers crossed for inspiration! 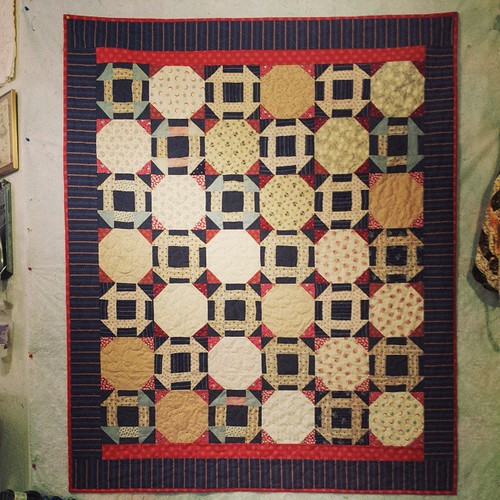 Current Status – Complete! This was my last UFO finish of 2014. I free motion quilted and bound machine bound it. It washed up beautifully and is now my favorite snuggle quilt.

January 2014 Status – WIP. Green charm swap from TTMT 2011 or so, I think. Borders added, have backing and batting. To be quilted/bound. Made using the 10 minute block quilt tutorial on YouTube.

January 2014 Status – WIP. Blocks from the 2011 Participants of The Project of Doom. I love this quilt. Adore it. Quilted by Shannon Shaw. It needs binding. Seriously, I’ve gotta get on that!

Current Status – Complete! Bound with scrappy binding in Hogwarts House colors. I’m so pleased to have this one done! It’s even more gorgeous (and more special!!) in person. It’s the prefect companion to my 2011 Project of Doom Quilt.

6. There and Back Again Block of the Month (TABABOM)

January 2014 Status – WIPish. 2012 Block of the Month on Fandom In Stitches. Have backing, batting and binding. Not yet quilted.

Current Status – WIP. This quilt is now basted and ready to FMQ. It’s in the queue after my Harry Potter Swap Quilt (above).

7. Project – There and Back Again signature blocks.

January 2014 Status – UFO. Similar idea to the Project of Doom signature quilt. I’m missing a block from one of the designers, so I have put off working on it. To be pieced into a top. Will need fabric for sashing and possible center piece, possibly the name of the event with dates in embroidery.

Current Status – UFO. I’m still missing a block for this quilt, but I have a plan for moving forward, so hopefully this will change to WIP very soon!

January 2014 Status – UFO. Needs a back and to be quilted, bound. One of my original designs.

January 2014 Status – UFO. (Actually, USO…UnStarted Object!). I’ve picked a pattern I like, and that’s as far as I’ve gotten. I need to find an accent fabric and cut this puppy out!

Current Status – UFO. No change since January 2014, but I do have plans to decide on accent fabric and pre-cut all the pieces before I go on Retreat with my bee in March.

January 2015 Status – UFO. These were unearthed during the same archaeological dig that found the Flannel Quilt included in my 2013 Recap. I have no idea why these weren’t on last year’s list. No matter, they are on this year’s! These fabrics are from pajamas my kiddos had when they were small. As in pre-school and elementary small. Yeah. Anyway, to be made into a quilt for donation to The Linus Connection.

Current Status – Complete! I used a Quilt As You Go technique, and completed the quilt with raggy edges instead of binding. I had very little flannel to work with and decided to not add borders. Donated to The Linus Connection in March 2014.

January 2014 Status – UFO. Has backing and batting. Needs to be quilted. One of my original designs.

Current Status – Complete! As of June, my Mustachio blocks are finally a quilt! I fmq’d it, complete with “hair” quilting in the mustaches. Mustachio now lives at the top of my stairs and never fails to illicit a chuckle or two when visitors first see it.

January 2014 Status – UFO? WIP? Kinda Both. This is the bag where I stash blocks I’ve designed for magazines, blog hops, events, etc., when I don’t have a project in mind for them. I’d like to do, I don’t know…something…with at least some of these this year. I have another bag just like this of unpublished designs. Mayhap I’ll do something with those, too!

Current Status – UFO. No change since January 2014, except that this bag now has more miscellaneous published designs in it and no plan for what to do next! I may remove this from the list in 2015.

January 2014 Status – UFO; 8 of 30. Way back in 2012, I hosted the Paper Pieced Pattern A Day Garden Party Blog Hop (the link goes to a round-up of all the designs). It was an amazing events, with 30 designers and 30 designs, one for every day in April, 2012. Between hosting, running three blogs, and having my first pattern published in a magazine, I kind of got lost and my blocks ended up in a bag collecting dust. I would love, at the very least, make some progress on these this year.

Current Status – As Complete as it’s going to be! I ended up using 7 of the 8 blocks I originally made during the Paper Pieced Pattern A Day Garden Party Blog Hop, added two Stars for Linus blocks that I received in the mail (sorry, I don’t remember who they came from!) added sashing & borders, free motion quilted the top and donated it to The Linus Connection in April 2014. I love the way this came out, even thought it’s only a fraction of the original designs intended for the quilt. Incidentally, swirls are one of my favorite things to fmq!

15. Not All Who Wander Are Lost

January 2014 Status –  UFO. 2 of 29. NAWWAL was hosted by Lilja on my fandom quilt blog, Fandom In Stitches. I had every intention of making this quilt. See that on the right? That’s my collection of Stonehenge fabric kept specifically so this project will match my There and Back Again quilt. Despite my best intentions, the only blocks I made for these event are the two I designed for it. Like the Garden Party quilt, I would like to make some progress this year.

Current Status – Removed from To Do list. While I really would like to make this quilt someday, I just have not felt inspired to work on it. I’ve removed it from my To Do list for the time being to work on other things. My Stonehenge stash is being used for my 2015 Project of Doom instead.

January 2014 Status – UFO. One of three made from orphan blocks for donation to The Linus Connection. These were slice and dice 9 patch blocks left over from a quilt I made for a friend’s wedding way back in 2007. Needs borders, backing, batting & binding.

January 2014 Status – Something. UFO. I’ve saved the most dubious project for last. Many years ago, before I ever held a rotary cutter or knew anything about squaring up, paper piecing, half-square triangles, batting, free-motion quilting or any other quilting term you might like to throw out, I got the crazy idea to cut up my favorite t-shirts from high school for a quilt-type project. Maybe a bag or pillow? I don’t know what I was thinking, but I can tell you I chopped without impunity, leaving very little seam allowance to work with. After years… And Years… And a few more YEARS stuffed in a bag on a shelf, I brought these memories of high school out into the light. This year, I will do something with them. I have no idea what, but something. It’s high time to get them off my self. Besides, I like a challenge. Ehem.

Current Status – Removed from List. As sad as I am to do it, I’ve removed this project entirely from the list. Many of the t-shirts had dry rot and weren’t worth saving. I kept a couple for nostalgia reasons and let the rest go to the great T-Shirt Store In the Sky.

January 2014 Status – Orphan Blocks. While these were not originally on the list, they were in my stack To Do for 2014. I have an ongoing collection of orphan blocks made both by myself and donated by other quilters all over the world (want to donate? just email me! sewhooked@gmail.com). Many of these blocks were donated prior to 2014 with a few newer blocks thrown in.

Current Status – Four Completed Quilts, Block Collection Still Ongoing. Four completed quilts, donated to The Linus Connection in 2014. I finished the top three at quilt retreat last year and donated them in March & April as I finished the fmq and binding. The fourth one was quilted by my friend and fellow Linus volunteer Marge and turned in later in the year.

Well, well, that’s not too bad, especially considering all I had going on in 2014, including Paper Piecing Vintage, As You Wish (look for my Princess Bride quilt on this year’s UFO list…oops!), two Quiltmaker Blog Tours and a number of other small events, deadlines, swaps and new projects! It was a very productive year and I’m quite happy with my progress.

Hardest of all, I think, was assessing what I had done and what I was likely to do and actually removing items from the list. I’d like to be more realistic about what I want to do in future and hopefully not drown myself in a list of new projects that end up on yet another UFO list!

How did you do in 2014? Did you keep track? Do you have a recap that you shared online? If you do, please do share a link in comments!

Now, to assess what I have to do for 2015 and make a brand new list! Let’s hope this one is a bit shorter…