Today I share a super packed video full of crafty and quilty goodness! Grab a cup of your favorite beverage and join me for 15 minutes of quilts, kittens and fun!

Watch Vanda talk about the swap items she received from me in the Favorite Color swap on Talk To Me Tuesday!

Don’t forget to visit my EQ7 Row Along post from last week for a free PDF pattern download of my row!

Are you Rowing Along with us? Be sure to join the EQ Seasons Row Along Facebook group! 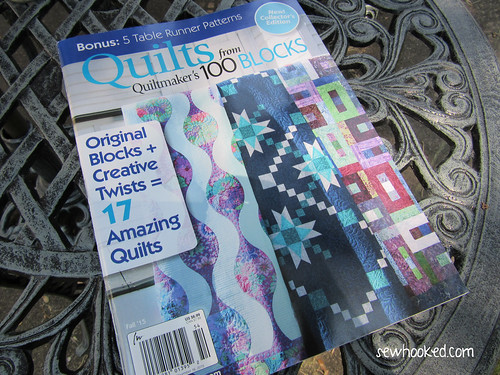 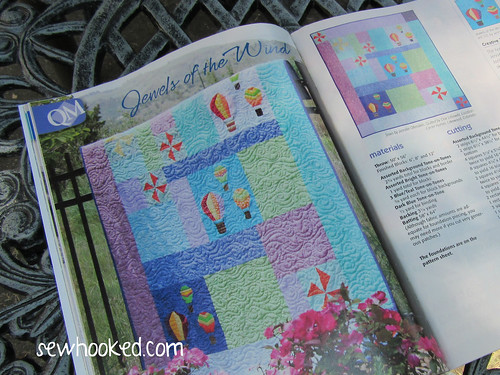 I have just a few copies of Quiltmaker’s Quilts from 100 Blocks available in my Etsy shop.  I’m happy to personalize a copy for yourself or a friend.  Get one before they’re gone!

Visit Fandom in Stitches for the Smartphone Quilt Along happening now!

In case you missed it, check out Aalia’s TTMT of swap goodies received from me!

Be sure to visit Fandom In Stitches tomorrow for The Fault in Our Stars Design Challenge!

part of the Friendly Familiars set

The wonderful thing about being part of a community like Talk To Me Tuesday are the wonderfully talented, generous and fun people I’ve become friends with.

This is Aalia. When I divvied up swap partners for the 1 Pound Swap, her name came out of the hat for me. I’ve known Aalia since the original Project of Doom back in 2011.

She’s a joy of a person, a fabulously talented designer, a stellar hand embroiderer, a lover of things Harry Potter and I was thrilled to get to send her a pound of crafty love!

Get more Crafty Goodness on Talk To Me Tuesday!

Featured Pattern: I Want My Mummy, just $2 on Craftsy

a bonus block for Monster Madness

Recently, one of my fabulous Talk To Me Tuesday friends, Clumsy Chord, organized a fabric postcard swap over on fabricpostcard

This is a summary of that swap with both what I received and what I sent. It was a huge amount of fun and I loved getting to experiment!

I’ll start with the postcards that I received, because they are FABULOUS! They all make me think of spring, which is lovely, because it’s just what I need right now.

They’re all fabulous and I have them hanging on the wall in my sewing/craft room!

For my cards, I took the opportunity to play on a small scale with a few different ideas. I challenged myself to use different fabrics and techniques on each one. The results are what you see here!

With the finish of the TTMT UFO Deadline Challenge, my mind is filled with the projects that I am not only working on, but the ones that have been on the back burner.

Before we start, some definitions:

This year, in addition to my list of UFOs, I’m including my WIPs and some DYI. This is by no means a complete list because I’m very much a Do It Right now kind of  person. That is to say, when I get an idea, I often have to stop everything and do it now!

Started as a pass around project with my bee in 2008, I sadly have not touched these blocks for over a year. I did go through the box and make a plan…

I plan to use the gold fabric for sashing and was playing with the idea of using brown for the cornerstones. The more I look at the fabric, the more I think I want brick red cornerstones. The brown just sort of disappears against the gold.

These are the results of two half-square triangle exchanged I participated in last year. I have not yet decided what I’m going to do with them, which is what gives them their “ish” status. They’re just waiting for the right project to crop up!

I started collecting shirts for an InuYasha quilt for my daughter last year. The plan is to use the Shoji Screen pattern and place the t-shirt fronts where the large panels would be. Unfortunately, I only have one t-shirt so far, courtesy of ladyoflosttimes. If you have an InuYasha shirt you’d be willing to part with, please let me know and we can work out a trade. InuYasha is her fandom of choice and the least a good fandom mommy can do is make a fandom quilt for her daughter!

These quilt blocks are the results of several swaps. Sadly, I’ve had them several years now. I am one step closer to doing something with them now that I realize I  need to break them into sets. The top set are all the 10″ blocks with images on them that say “Harry Potter” to me. The bottom set are more traditional blocks, blocks that are bigger (or smaller!) than 10″ or magical blocks that aren’t as HP-ish. I still love all the blocks, but I definitely need to make two, possibly three, quilts out of these!

Started two years ago from a swap I participated in on All About Paper Piecing (a currently defunct ning network), this quilt is getting a piano key border out of Christmas fabric. I’ve already got it sorted out and plan to start cutting in the next month so it’ll be ready to go to quilt retreat in March.

I started this NYB for a class I taught last year. I had lots of models for the class, all in different stages of done-ness. The class was a blast…and then I lost my steam. I will be optimistic and take this one to retreat in March. I have all the pieces cut and just need to get them together. Will I? Who knows!

I took a beginning hand appliqué class last year and learned lots! I even almost finished my class project. Can you see there are two leaves that need to have buds added and to be stitched in place? That’s it…all I have left to do to finish this block. I’m putting it in my car so I can work on it in the carpool line. Maybe I’ll actually finish it then!

The Project of Doom

All the blocks for the PoD are designed and I am several weeks ahead of everyone else in piecing them. I plan to have my quilt top finished by the end of March.  This is my pet project for 2011 and my gift to my friends in the Harry Potter crafty fandom. Want to play along and make your own Harry Potter mystery quilt? Click the banner above!

Below – Tackett protects the PoD blocks.

5 @ The Hive is Honey Bee Quilt Store ‘s Block of the Month. I’m participating for the first time this year. The two blocks above are my January blocks. I’m doing the fall colorway with the extra block. By the end of the year, there will be enough blocks for a completed quilt top. I’m super excited about this one because 1)I’m not designing it and 2) it comes with fabric and 3)I love the blocks and the layout.

I completely forgot about this until I cleaned out my stash. I will get back to working on it after I finish the next project on the list. This will probably be a blanket for The Linus Connection.

After doing absolutely nothing with these fabulous black and red knit and crochet blocks from a Twilight Crafts swap in 2009, I have created enough white blocks to make a chess/checkerboard out of the set. The next step is to crochet them all together and then add a red, white and black border.

This is the only unfinished craft project I found, and it can really be classified as a sewing project…so, go figure. This was the bowl I started when I taught the It’s A Wrap class last fall. I brought it home from class and promptly forgot all about it. I would like to get back to it and finish it up because the technique is just so darn fun!

Just last week, I pulled the carpet off of our stairs. It had horrible, gross carpet that the builders installed 20 years ago. I’ve steamed cleaned them so many times, the thought of doing it again made me feel like weeping. The stairs are now de-carpeted, de-carpet-tacked, scrubbed and primed. The next step is a faux finish to turn the stairwell and stairs into a stone passageway. Yeah, you heard that, I actually said it out loud!

I have about a million and one other projects that I’d like to tackle this year. These are some ideas that have crossed my mind that are on the high end of happening.

What are you working on this year? Do you have any UFOs or WIPs? Blog about them and leave me a link so I can see what you’re up to or tell me in comments!

In which I talk about swaps, gum, paper piecing classes, Batiks on Black and crocheting for The Linus Connection!

Lots of updates on completed swaps as well a Super Secret Guest and some Halloween photos!

Promote Your Page Too

Okay, so the video is almost 10 minutes, but that’s because there’s an intro!  See my completed 12″ Block Swap-ghan and then take a tour of my recently (and mostly!) cleaned and reorganized sewing/craft room.