In which I talk about the Silent Auction totals, share what I won in the auction, some mail, quilt finishes, and more!

Posts on this blog may contain affiliate links to help cover the cost of my website. I thank you for your generous support. ♥

Posts on this blog may contain affiliate links. Thank you for your support. ♥

Are you quilting along with Paper Piecing Vintage?

Share a Signature Block for the PPV Signature Quilt!

Get just the tenth block for $2.95 on Craftsy

Get the complete Paper Piecing Vintage pattern for $10 from…

Happening Now On Fandom in Stitches!

Welcome back to Free Pattern Friday! Today, I thought we’d do something a little different.

In a shocking turn of events, today’s patterns are not paper pieced!

As you’re probably already aware, in addition to living it up here on Sewhooked, I also run Fandom in Stitches, a fandom quilting website.

One of the best parts of Fandom in Stitches are the awesome quilt-alongs that we host there!

What makes a quilt along different from the multitude of individual patterns we share is that an event includes not only the blocks to make the quilt but also instructions for putting the quilt together, what I think of as the “final layout.”

As You Wish: A Princess Bride Quilt & Stitch Along took place on Fandom in Stitches in 2014. We had lots of amazing designers contributing patterns to hand stitch and paper piece.

As You Wish had two final options, both designed by yours truly.

Both quilt patterns can be used with any 7″ (7 1/2″ blocks). You can even fussy cut a fun fabric or use pre-printed fabric book pages.

Save or print from Google Drive

Part of As You Wish: A Princess Bride Quilt & Stitch Along on Fandom in Stitches 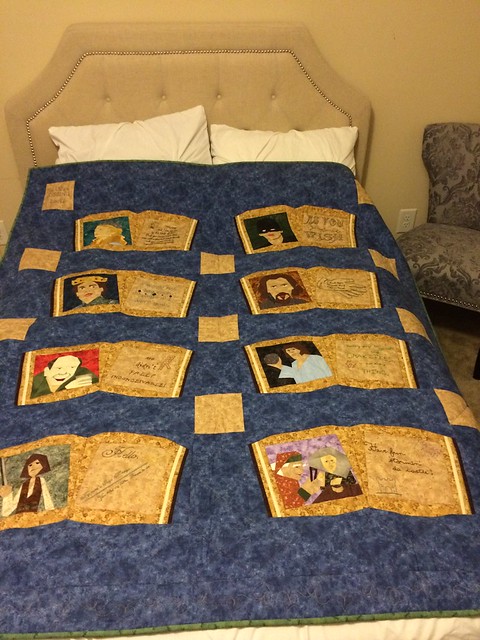 save or print from Google Drive

Part of As You Wish: A Princess Bride Quilt & Stitch Along on Fandom in Stitches

This is my own quilt top was made using the Four Patch pattern. After a couple of false starts, it is officially the next of my UFOs in line for me to quilt (hence the not-so-fabulous photo!). Thinking about quilting this is what inspired me to revisit these two layout patterns I created for As You Wish. 🙂

April is my birthday month and you’re invited help me celebrate by participating in the 3rd Annual Fat Quarter Lotto. It’s super easy – send up to four fat quarters, I’ll draw a winner* “live” on Talk to Me Tuesday on April 25.

It’s free to play. I am self-disqualified from playing. This is my way to say Thank You for another fun year of sharing!

(Save on postage and mail with your Fat Quarter Lotto!)

Stop by Sewhooked on the second and fourth Mondays of every month through June for the Paper Piecing Vintage Quilt Along (PPV2017)!

Get the complete Paper Piecing Vintage quilt pattern for $10 from…

Happening now on Fandom in Stitches!

Join the Sewhooked Facebook Group for community, support & prizes! I’ll be there, as will my awesome pattern tester Amber along with many other friends of Sewhooked. We’ll answer your questions and nudge you along if you need it. Joining the group is never required, but it is fun!

Want to share your own crafty show & tell? Consider making a video and sharing it with our Livejournal Community!

The December Sewhooked prize winner is quiltinpeace, Vanda! Vanda wins a free copy of Fairy Tale Femmes. This is the final prize for participating in My Favorite Things in 2016. Want to keep sharing? 2017 giveaways will take place in the Sewhooked Facebook Group!

Paper Piecing Vintage, our 2017 Quilt Along, started yesterday with our first block, The King’s Crows (below).

Get the complete Paper Piecing Vintage pattern for $10 from…

Happening now on Fandom in Stitches!

At the beginning of the last few years, I have recapped the UFO projects accumulated at the beginning of the previous year to see how much progress I made on each one. These lists do not include new projects that popped up over the year, though newbies often make an appearance on the following year’s list! When 2013 began, and I made my 2013 list, I was working full time outside of my home. After half a year of burning the candle not only at both ends, but in the middle too, I realized the life I was leading was not working for myself or for my family. When I left my full-time position, I fell right back into Sewhooked and, most importantly, back to my family.

USO = UnStarted Object – a project that has yet not made it out of it’s incubation period. Often comes in the shape of a stack of fat quarters, a jelly roll or other similarly delicious fabric apparition. Can also appear as a pattern or book with little hearts doodled on the cover. Hopes to be a…

Status – FO and Gifted! Discussed in this TTMT (6:40 or so). Quilted by my friend Osie and given to my in-laws last year.

Project – Harry Potter Alphabet Quilt, designed by me. January 2013 – To be quilted & bound. Have back/binding fabric.

Status – FO! I talk about it in this TTMT. Quilted by Osie. She practiced pebbles on this and I LOVE the way it came out! I’m keeping this beauty for myself. I started designing and piecing the blocks in 2005 or 2006 and they sat in a shoebox for years.

Status – FO! Done and gifted to my best friend, Jewells!

Status, HP Swap Quilt 2 – FO. These were blocks that didn’t quite fit the layout I worked out for the HP blocks. This one was pieced, free-motion quilted, bound and donated to The Linus Connection

Project – Vintage quilt top. January 2013 – To be quilted, possibly by hand. Needs a back & binding. I’m thinking muslin for the back. Status – UFO. No change. 😦

Status – WIP. Has borders, backing and batting. Needs to be quilted & bound.

Project – Green/Purple 10 minute block quilt. January 2013 – Needs borders and to be quilted and bound. To be saved for a baby gift.

Status – WIP. Borders added, have backing and batting. To be quilted/bound.

Project – There and Back Again signature blocks January 2013 – To be pieced into a top. Will need fabric for sashing and possible center piece. Status – UFO. No change. I’m missing a block from one of the designers, so I have put off working on this.

Project – There and Back Again (TABABOM). January 2013 – Needs a back and to be quilted, bound.

Status – WIP-ish. Have backing, batting and binding. Not yet quilted.

Project – Project of Doom Signature Quilt January 2013 – Finish the hand embroidery in the border, needs a back and to be quilted & bound. Will read “The Project of Doom 2011 Participants.”

Project – Embroidered block quilt top. January 2013 – Needs a border, back and to be quilted, bound. To be saved for a baby gift.

Status – WIP. Borders added, have back & binding. To be quilted & bound.

Project – Topsy Turvy Trees January 2013 – Needs a back and to be quilted, bound. Status – No change.

Project – Orphan block collection (mine and many many collected from others) January 2013 – Make into a quilt (or several!) for The Linus Connection.

Status – FO/WIP – Finished one quilt and two quilt tops for donation to The Linus Connection and still have more orphan blocks! The second quilt needs a border, backing, quilting and binding. The third (star) quilt needs a backing, batting & binding.

Project – Flannel quilt top (I have NO idea when I pieced this, most of these fabrics have been gone from my stash for years!) January 2013 – Needs a back and to be quilted, bound, to be donated to The Linus Connection.

Project – Monkey fabric from Jewells January 2013 – NEW PROJECT – Make into a quilt for The Linus Connection.

Status – FO. Made into a quilt top during Retreat 2013 and donated to The Linus Connection. Donated to The Linus Connection. This is only ph0to of the top I could find and it’s on the wall at the very beginning of this TTMT. I won’t lie, watching this video brought on the tears. My beloved Tackett is giving me some serious snuggles at the beginning which reminded me of why I miss him so much every day.

Status – UFO. (Actually, USO…UnStarted Object!). I’ve picked a pattern I like, and that’s as far as I’ve gotten. I need to find an accent fabric and cut this puppy out!

Project – Fabric collection from Kristel, won from one of her TTMT drawings. January 2013 – NEW PROJECT – I would like to make this into a new bag for myself! Fancy that!

Status – Not even a UFO.  I picked a bag pattern and then changed my mind. I’m considering sharing the love and passing this on as a prize.

Summary – Not bad, not bad! That’s seven completed quilts, one quilt that just needs a binding, several completed tops and a couple of projects that just need to get a little closer to done. I’m always equally surprised by A) how much I finished and B) what I forgot completely about.

Feel like being challenged to work on your UFOs in 2014? Pren, from The Convivial Crafter, a long time crafty friend of mine, has started a crafty support group Facebook group for just that reason! Her goal: One finished UFO per month! Totally doable, right?! Join UFO Project 2014. There are drawings and stuff!

Piece with me! Paper Piecing Vintage BOM, $12 on Craftsy!

I’ve decided 2010 will be the year I finish some long-standing UFOs.  I’ve made a list and added to the dry erase board I keep in my sewing & craft room.  Here’s a more visual version to keep me inspired!